NYPL’s Books We Love For Teens: Books to Fit Your Mood 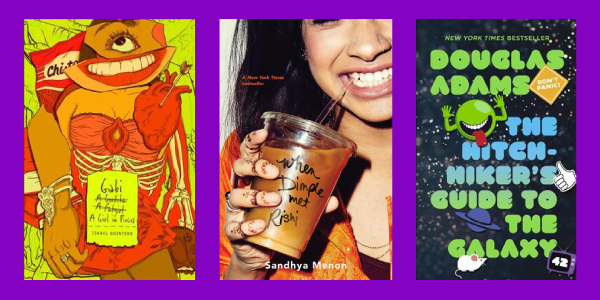 From our friends at the New York Public Library, here’s an excellent list of recommendations for teens.
You’ll find old and new titles in all different genres.

When I want a book that will pack an emotional punch:

Yaqui Delgado Wants to Kick Your Ass by Meg Medina

Piddy Sanchez upsets a school bully without realizing it, and soon all of her other problems start to seem small in comparison.

Gabi, a Girl in Pieces by Isabel Quintero

Gabi writes about dealing with the challenges in her life, including her drug-addicted father and her mother’s expectations that she should be a “good girl.”

When I want a book that will stretch my brain in unexpected directions:

We Were Liars by E. Lockhart

The Spill Zone has been quarantined for three years. But Addison sneaks into the area at night to take pictures of the nightmare creatures that live there now.

More Happy than Not by Adam Silvera

Aaron lives in a world in which bad memories can be erased.

When I want a book that is quiet but powerful at the same time:

The Poet X by Elizabeth Acevedo

Xiomara struggles to get past everyone’s expectations of her and figure out who she wants to be. Joining her school’s slam poetry club might be a step in the right direction.

Long Way Down by Jason Reynolds

Will leaves his apartment to take revenge on the person who killed his brother. But when he gets on the elevator, everything changes.

This One Summer by Mariko Tamaki & Jillian Tamaki

Usually, summers at the lake house are peaceful and relaxing. But this summer, Rose spends more of her time thinking about secrets, drama, and what it means to grow up.

When I want to take a trip down memory lane:

Katherine and Michael love each other. But Katherine will learn that losing your virginity doesn’t guarantee love, and being in love now isn’t the same as being in love forever.

Lord of the Flies by William Golding

A group of boys survive a plane crash on an island. No adult supervision sounds wonderful at first, but it means that the boys will be in charge of making their own rules.

Jacob Have I Loved by Katherine Paterson

Louise grows up in her twin sister’s shadow, never getting the same amount of love or attention. She dreams about a future that will take her away from her family and the island she calls home.

When I’m feeling depressed, and could really use a pick-me-up:

The Hitchhiker’s Guide to the Galaxy by Douglas Adams

This hilarious science-fiction story is about a great many things, including hitchhiking, towels, bad Vogon poetry, Pan Galactic Gargle Blasters, and the number 42.

Dimple and Rishi both come from traditional Indian families, but they have very different ideas about arranged marriages. Could their story end happily ever after?

As Lord Ballister Blackheart’s new sidekick, Nimona gets to have some destructive fun.  But she also wants to change what people think about heroes and villains.

Eric is a former figure skater. He bakes amazing pies. He’s a vlogger. And he’s gay. How much will his life change when he joins the Samwell University hockey team?