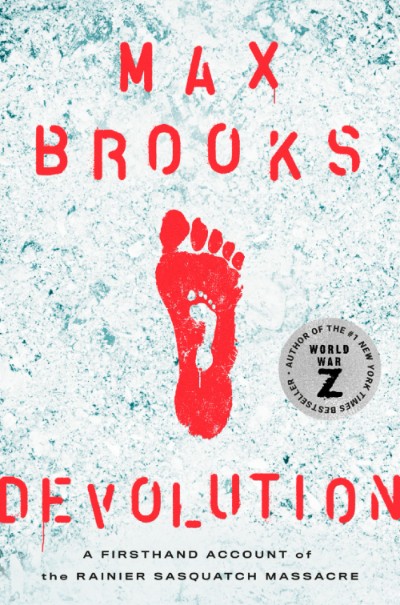 Check the Catalog for Availability

I’ll admit right up front, Devolution: A Firsthand Account of the Rainier Sasquatch Massacre by Max Brooks, the author of the wildly successful novel and film World War Z, is not my kind of book. I typically read non-fiction – history, philosophy, and true-life disaster accounts. When I delve into fiction, it’s usually very dark, hard-boiled crime novels or equally dark and existential 1000-page Russian tomes from 150 years ago.

But when I heard the premise of Brooks’ newest novel, I could not resist. Set in today’s Pacific Northwest, the story follows a small group of tech-savvy millennials, aging hippies, New-Age devotees, and a war-hardened senior citizen who build a utopian Back-to-Earth settlement deep in the nearly unpassable forests of Washington State. What they hadn’t planned on was the catastrophic eruption of Mount Rainier AND the subsequent descent of the local Sasquatch population in search of food. Yep, Bigfoot (Bigfeets?) Lots of them. And it turns out that tech-savvy millennials, aging hippies, and New-Age devotees are on the Bigfoot menu.

When I was in college in the early 1990s a paleontology professor in a class I was taking told us about a new book to be published by the author Michael Crichton. The premise hooked me. It was about scientists discovering a way to artificially bring dinosaurs back to life using DNA discovered in amber. And then, as if that weren’t awesome enough, a mad billionaire creates a “zoo” of dinosaurs on a far off tropical island and havoc ensues. I read Jurassic Park almost in one sitting—I loved it.

I was really hoping Devolution would be my next Jurassic Park “find.”

Devolution is not a bad book. It’s written in the form of later-discovered journal entries by one of the missing residents of the settlement and is interspersed with interviews and news reports. There is a fair amount of suspense and some gory scares. Some of the background science about volcanos and yes, Sasquatches, is interesting. In short, it will make a decent Hollywood movie someday and I’m betting that’s half the reason it was written.

My biggest problem with Devolution though, is the characters. Within the first 50 pages or so you know exactly who is playing what stereotypical role in the story. And the thing is, with only one exception, I didn’t much like or care about any of the characters. When the mutilations and mangling began, I was kind of “Meh, he had it coming anyway.” Perhaps that was the message Brooks was trying to make all along though. By the end of his novel, I cared more about Bigfoot than I did about any of the other characters I’d just spent hours getting to know.